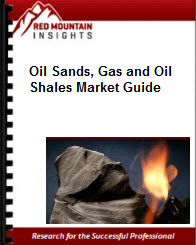 Shale gas could account for up to 46% of U.S. natural gas production by 2035 according to industry experts. This comprehensive research report explores the tremendous market opportunities offered by these three unconventional sources of energy - Oil Sands, Gas Shales, and Oil Shales.

The Canadian Oil Sands rivals Saudi Arabia as the largest oil play in the world with 315 billion barrels of estimated recoverable resources. In the last three years, there has been a significant number of direct investments made in Canadian oil sands by Asian companies as producers turn to overseas partners to provide capital to speed up development and to share in the risk and rewards of projects.

Supplies from the oil sands will continue to comprise the bulk of the anticipated future increases in
overall Canadian crude oil production. Oil sands projects that are already operating or are in construction account for the growth until 2015 or 2016.

In western Canada higher production is forecast in both conventional and oil sands areas with the bulk of this output originating from the Western Canada Sedimentary Basin, according to research by the Canadian Association of Petroleum Producers.

According to projections provided to AWI by the Canadian National Energy Board, oil sands production is expected to contribute some 1 billion barrels per year, or 73 percent of the Great White North’s overall crude production, by 2020.

This report, Oil Sands, Oil Sands, Gas and Oil Shales Market Guide, analyzes the market potential of oil sands, shale gas and shale oil, including an overview of the each energy source, extraction technology, market potential for each, and profiles of the major players involved in each industry.

The economics of each is analyzed in this comprehensive report including the environmental impact of extracting energy from these three forms, government programs to spur growth in the oil sands, gas shale and oil shale industries, and profiles of major industry players.

Oil Sands, also known as tar sands and bituminous sands, have emerged as a source of unconventional petroleum resources. Oil sands are being used all over the world these days as an alternative to petroleum. While Canada is a leader in the oil sands industry, the United States and other countries are also catching up fast and are developing oil sands in a bid to upgrade the bitumen source to synthetic crude oil.

Gas shales are a type of natural gas that is produced from shales. With the rising demands for energy in the world today, shale gas has become an important source of natural gas in not only the United States, but all over the world. In fact, many analysts are predicting that shale gas will supply nearly half of the natural gas supply in North American by the year 2020.

Meanwhile, oil shales are organic sedimentary rocks that contain a large amount of kerogen that can be converted into liquid hydrocarbons.

Read this report for an overview of each market country-by-country, to gain an understanding of the technology involved in extracting each form of energy, industry trends, and major players’ profiles.

With three energy sources analyzed together in one research report, it is perfect for investors and researchers who are interested in learning about market potential in the Oil Sands, Gas Shales, and Oil Shales industries.

Impact of Shale Gas on the Global Energy Industry