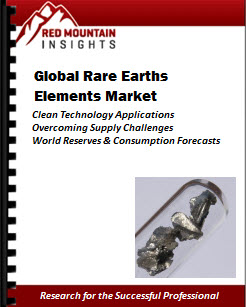 Rare earth elements (REEs) are used in the integrated circuits found in most electronics and smartphones, radar technologies and missile guidance systems.

Though REE resources are distributed across the world with 36% located in China and 13% in the United States - their production is dominated by China which produces 97% of all REEs.

In an effort to control the global market for rare earth elements, China recently instituted production and export quotas to monopolize the market, and is practicing price control by limiting the supply available for export to other countries.

This report examines the Global Rare Earth Elements market, how skyrocketing demand will affect supplies, and alternatives to rare earths.

These elements are critical to civilian and military high technology applications. Although reserves are abundant, it is difficult to find them in sufficient concentrations where they can be profitably mined and processed. The process of extracting and processing rare earth elements into alloys and permanent magnets is labor and capital intensive.

As a result of China’s production dominance, REEs continue to remain supply constrained commodity. The heavier elements, in particular, are geologically scarce and likely to remain in deficit for longer than the lighter elements, which account for a much larger proportion of Chinese production and for which new sources of supply outside of China can be developed relatively easily.

The energy industry stands to be profoundly affected by the increasing demand, and reduced supply of rare earth minerals, as renewable energy technologies such as wind and solar, and electric cars, find a larger market demand.

Key Findings:
- In 2012, prices soared as China imposed severe export quotas on these minerals, basically removing them from the global marketplace. China asserts that it imposed the limits on environmental grounds.

- China did not place equal restrictions on domestic producers. The artificial export restraint resulted in triple-digit increases in worldwide prices of these minerals.

- The intended result of China’s policy is that manufacturers have incentive to base production in China. Technology-intensive companies are now incentivized to move their factories to China where these minerals are relatively cheap and accessible.

Key Findings:
- Over the next decade, demand for rare earths is expected to be driven largely by a continued shift to energy efficient green products, increased use of mobile electronics, and electric vehicles.

- Outside of China, the rest of the world continues to work toward securing rare earths production capacity but still experiences delays and high capital costs.

- In United States, the rare earths sector is likely to remain very volatile in 2012.

- Exploration of non-China-based REEs is growing. Companies such as Molycorp and Lynas are expected to commence their production in 2012 which could potentially have a significant effect on the overall REE market.

- Scientists are working to develop alternative technologies that would replace components that use rare earth elements. This report contains case studies of projects that are being funded by the DOE.