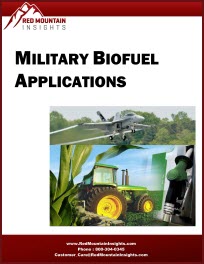 This report outlines U.S. Military efforts to bring biofuels into widespread use into all areas of its operations and branches. Learn which feedstock are regarded as the most promising and sustainable for producing biofuels. And discover what measures the military is taking to develop and support these sources.

In 2010 President Obama announced energy policies which include continued development and use of advanced biofuels in the nation's fleet and military vehicles. This report examines how the military is using biofuel to reduce costs, curb emissions, and practice energy independence.

Biofuel is any fuel that is derived from biomass - recently living organisms or their metabolic byproducts. It is a renewable energy source, unlike other natural resources such as petroleum, coal, and nuclear fuels. Biodiesel is a cleaner-burning fuel made from renewable fats or vegetable oils that can help increase U.S. energy security by reducing dependence on foreign sources of oil.

The Pentagon is pursuing the support of development of homegrown energy sources to protect national security. It calls for a goal of using 50% more alternative fuels in all Navy planes, vehicles and ships in the next 10 years. Federal mandate requires the Marines to reduce energy consumption by 30 percent by 2015.

The greatest barrier to large-scale commercialization of biofuels is their relatively high cost of production. Because they are used primarily to replace gasoline or diesel, world petroleum product prices drive commercial viability of biofuels to a large extent.

The Navy’s 2020 goal across land and sea operations is to cut fossil fuel usage by half, largely through the use of biofuels.